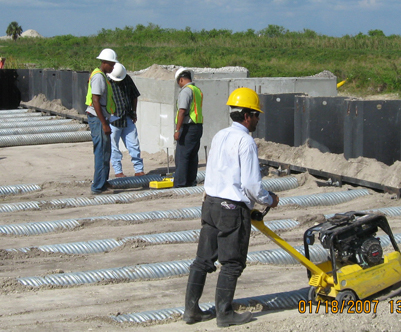 How strain gauges are embedded in concrete

Concrete generates stress during the curing process. In the case of reinforced concrete, the stress can lead to strain and bend the concrete or create cracks.

Concrete generates stress during the curing process. In the case of reinforced concrete, the stress can lead to strain and bend the concrete or create cracks. Careful observation of strain occurrence is important in a cast concrete structure.

Traditional gauges use semiconductor-based sensors. They have a wire enclosed in a tube and held stable from both sides. Changes in stress at the ends generate an electrical impulse which is then measured out as a deflected voltage to indicate the change in strain.

There are a few limitations to this method. The response as an electric impulse needs to be carried over wires and if the contact points of the wires change subject to corrosion it can alter the electrical signal while transmission and give erroneous results.

Sensor-based gauges use sensors instead of wire-based strain gauges to measure any change in stress. The message is transmitted in the form of frequency rather than electric impulse which is undisturbed to any electrical or chemical changes.

Signals are decoded by dataloggers mounted on the surface of the structure. Dataloggers are very light and cost-effective equipment with a power supply that can be acting as an interface to other analytic devices like the laptop or PC.

Concrete rebars are tied with sensors with small wire ties prior to casting. The connectivity of the sensors to the surface-mounted datalogger kit is taken through optical fiber cables which are resistant to moisture and chemical changes and hence difficult to destroy once properly installed.

The dataloggers contain the power set up for the whole system and contact points for access to data. Sometimes like in SmartPile® Suite the datalogger has an antenna that can successfully transmit the data over the internet gateways to specially designed clouds. Analytics-based platforms can be then used to check the data and control workflow from remote locations.